I remember when I was small and my family celebrated advent by lighting one or more candles in the special advent candlestick that we had. Me and my siblings would watch with wonder as a big plate full of lussecats, gingerbread/ginger nuts and occasionally other seasonal treats were laid down on the table in front of us, doing our best to suppress the impatience inside of us until my mum our my step dad said “Oh, go on then.”.

And we’d eat our share until there were none left apart from the stash of buns in the freezer and the tin of biscuits hidden in a corner of a kitchen cupboard left for the following Sundays in December. Mum would put out the candle/s in the candlestick and we’d go to bed and fall asleep with the smell of saffron, raisins, Christmas spices from the biscuits and the fading candles in our noses, dreaming about buns to be eaten next time.

It’s those smells exactly that I experienced yesterday on the third of advent, enjoying some Christmas treats as I watched the three candles burn. The smell of my childhood’s December days.

As it’s only a week until Christmas even this might be a little late, especially seeing as this dough needs at least a week in the fridge until you can bake with it (although I tried after “only” six days and that was fine), but it might come in handy next year or if you enjoy eating gingerbread/ginger when Christmas is over. The reason the dough needs to sit in the fridge for so long is (I think) so that the flour can swell up a lot and make the dough easier to work with and for the spices to develop more flavour.

I always used to think of these biscuits as gingerbread, but according to Wikipedia these are actually ginger nuts, so from now on I’ll call them that, not only because of what Wikipedia says but also because I have noticed that these are indeed different from the very thick biscuits I see for sale here that are called gingerbread, often they are lacking one or more of the spices in the Swedish equivalent for starters.

I’m using a recipe from Riddarbageriet in Stockholm. This recipe makes the tastiest ginger nuts I’ve ever had the pleasure to eat. I’ve seen people describe the flavour and consistency of these as “knäckig“. I can understand why they say that, but I can’t think of a good way to translate for you the reasons why. Maybe because they possess a richer, caramel-y, sweetness than other ginger nuts and for their interesting consistency that are slightly harder than other biscuits and gets a little bit stuck in your teeth?

Many old, classic, Swedish biscuit recipes make batches that are huge. You often see recipes that make well over 100 biscuits and even 200 biscuits aren’t unheard of. More modern ginger nut recipes are still that way, maybe because there’s a chance that they aren’t modern recipes at all, but still the old ones your grandmother used when she baked with her mum decades ago? Anyhow, I decided to make only half a batch and I still got many biscuits out of it so unless you’re Swedish and eat “gingerbread” like, well, bread, then I recommend that you follow the quantities of ingredients I stated. The original recipe calls for seven grammes each of cassia and ginger so that should be 3.5 grammes each but my scale isn’t that precise so I used four grammes instead but depending on how you like your ginger nuts you can use three or even five. I should have used five. It also calls for four grammes of cloves and cardamom but I used four grammes even thought I made half the batch. The recipe also calls for ground up bitter oranges but I had none of those. The recipe calls for “mörk sirap” which translates to “dark syrup” in English. I find that treacle is too dark so I used one third treacle and two thirds golden syrup.

Grind the spices in a pestle and mortar if you’re using whole spices. Put all the ingredients in a mixing bowl and knead until just mixed together. Cover the dough in cling film and let it sit in the fridge for one to two weeks. Put the oven on 170 degrees C (150 if you’re using a convection oven). Take one part of the dough at a time and knead it slightly until it’s pliable, roll it out until it’s 2-3 mm thick and use biscuit cutters to cut out the shapes you want. Bake it in the oven for a few minutes until they look done. Let them cool on a cooling rack.

If liked you can pipe decorations on them using royal icing. You can also make little holes in the biscuits before baking, thread a string through and give as a Christmas gift.

Oh, and don’t forget to try some of the dough. You know, just to make sure it’s not poisonous or anything. 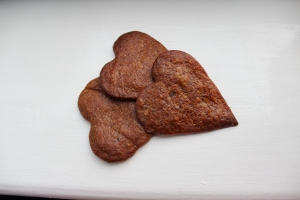 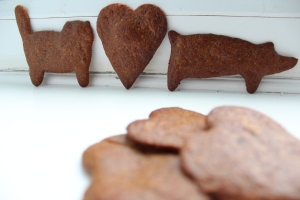 Search through my posts